Tango is an urban and rural mix, which basis can be found into Arolas, Bardi, Cobián works… Later, Julio and Francisco De Caro were the apogee of an era. What I did, is to pursuit the same path without forgetting the roots, because tango needs continuity.

Gregory Diaz
2013-05-01
Do not copy this content without authorization.

His two oldest browsers played the violin, his father the flute, but Osvaldo Pedro Pugliese loves piano. Despite the cost, his father buys him the instrument and at 15 years old he starts working as a musician into several groups, including the orchestra of Pedro Maffia, as well as mute cinema. In 1922, he writes the famous Recuerdo, played for the first time by Juan Bava at Café Mitre, and then recorded by Julio De Caro on 78rpm disc.

After three years with Pedro Maffia, Pugliese builds a sextet with Elvino Vardaro (violinist). This sextet ends after only few months, and reappears from 1930 to 1931, this time with Anibal Troilo at bandoneon and Alfredo Gobbi at violin. Too bad there is no recording at all from this group, made up of future essential tango figures. From 1934, Pugliese plays in Pedro Laurenz orchestra, then he accompanies the singer Ernesto Famá. In 1936, he also joins Miguel Calo. During that period, his political convictions lead him to jail.

Five days just after getting out of jail, he goes on stage in front of his own orchestra, which is managed as a cooperative. 11th August 1939, the orchestra includes Enrique Alessio, Osvaldo Ruggiero and Luis Bonnat at bandoneons; Enrique Camerano, Julio Carrasco and 'El Chino' Tursky at violins; Aniceto Rossi at double bass; the singer Amadeo Mandarino, and of course Osvaldo Pugliese at piano.

After many shows and an increasing success, he arrives at 'Radio El Mundo' on 31st Decembre 1942, until the famous show 'Ronda de Ases' in 1943. He also plays at 'Casino' theater. At that time the orchestra included the following musicians: Enrique Alessio, Osvaldo Ruggiero and Esteban Gilardi at bandoneons; Enrique Camerano, Jaime Tursky, Oscar Luis Herrero and Julio Carrasco at violins; Aniceto Rossi at double bass, and the singer Roberto Chanel. There was also other singers like Alberto Lago (no recording) and Jorge Rubino (who recorded Milonga de mi tierra).

1945, Alberto Morán joins the orchestra and contrasts with Chanel with his romantic style and his aptitude for long phrasing and half-voice that you can hear on Una Vez, Maleza (1945), El Abrojito (1946)…

Pugliese is characterized by his "decarean” style (from Julio De Caro he is found of), especially the superposition of multiple melodic layers, and the use of the rubato that result in intense melancholic and romantic expression. His arrangements are of the most complete and rich at all the levels, which probably couldn’t have been possible to this extent without an orchestra management in phase with his political convictions. Each musician plays his role within the orchestra, but also has the possibility to express oneself individually. As a musical result, we can find several solos or parts that successively focus on each instrument, which is not the case of Di Sarli who prioritizes the whole orchestra. Despite being sentimental and romantic, Pugliese doesn’t forget the rhythm and uses any kind of syncopation and off-beat, as well as some percussion effects specific to tango: 'la chicharra' (1), 'el tambor' (2)…
"Osvaldo Pugliese is the Count Basie of Tango […] Count Basie had the swing and Osvaldo brings this canyengue side of tango. Nobody will surpass it because it has become a style… and styles remains." - A.Piazzolla
The accents of Pugliese, mixed with the arrastre effect, are unique. There are long pauses, surprising restarts, and this power, an impressive strength that tears and takes us. However, the result is neither sharp nor rigid, which is the usual trap some successors of his style may fall in. The rhythmic basis of Pugliese perfectly fits a calm and intense walk, while more complex interpretations require sudden speed or intention changes. He provides a large and extreme emotion range, from a soft violin crying glissando to canyengue rhythmic games, and through the bandoneon anxiety, stretching with dissonance…

Audio examples:
(1) Chicharra: at the beginning of Guitarrita (1954)
(2) Tambor: at the begining of Zum (1972) with the bandoneon at the background

Another rhythmic pattern? Not that easy… This trick, also used by Frédéric Chopin (among others classical music players from the romantic period), is to still time and give it back later. In concrete terms, we slow down some notes – or the complete orchestra - and accelerate some others, to enhance the melody and better reveal emotions that wouldn’t sound or fit so well with the regularity of a metronome. Singers and soloists naturally use the rubato, but to apply the same to the whole orchestra - including its rhythmical basis - is much more complex because it directly affects the time reference on which musicians agree and play together. This technique implies an accurate adjustment between musicians, and few hours of practice…

The arrastre (from the verb 'arrastrar': to drag) is a way to prepare the next beat by playing a sound just before it and crescendo (increasing the volume). By doing so, the accent doesn’t appear suddenly like D'Arienzo or Biagi, but we feel it coming in like a high speed train or like a wave getting bigger and bigger before breaking on the rocks.
"One of the tango characteristics comes from pampa’s folklore. Musically, this influence appears in the arrastre firstly used by Julio De Caro, then Carlos Di Sarli and myself. There are also the accents that De Caro put on the first and third times, sometimes with an arrastre. What we did is to combine both: the accent on first and third times, with the percussive arrastre that follows. This accent and arrastre combination provides tango with a unique strength that is impossible to get even using instruments like drums or trombone…" - O.Pugliese

How to identify Pugliese at the milonga

To identify Osvaldo Pugliese at the milonga, you just need to recognize...

Otherwise, keep in mind most DJ keep the best for the end… ;-)

Gregory Diaz
2013-05-01
Do not copy this content without authorization. 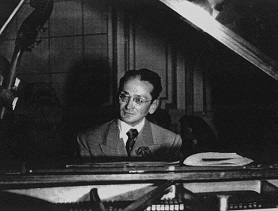 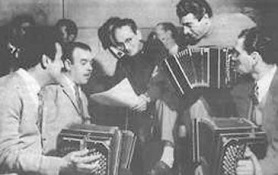 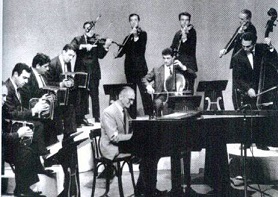 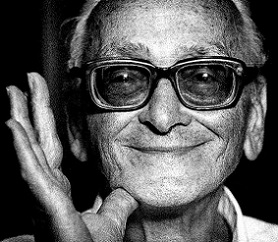