Tango is first of all rhythm, energy, strength and personality. Tango in the old days, the one from Guardia Vieja, had all of this, and we must ensure that it never loses it.

Gregory Diaz
2012-02-01
Do not copy this content without authorization.

Juan D'Arienzo (14/12/1900 - 14/01/1976) "El Rey del Compas" is one of the most important and famous tango figure. Composer, violinist and conductor, his energetic and rhythmical style is at the origin of his success. He recorded more than 1000 recordings during his career, a huge discography on his own! This article traces the maestro history, main changes of his orchestra over the time and the evolutions of his style.

Around 1928, Juan D'Arienzo set up a typical orchestra which recorded about 40 recordings under the Electra label. Those are the first recordings of Juan D’Arienzo and not very famous today. We still not recognize the style we are used to and that will make him so important in the tango history at the end of the 30’s. The rhythm is slow, the voice matches with the period, but we can already distinguish a musical detail, characteristic of D’Arienzo: the "cuarta cuerda" (fourth string), the famous sentimental violin which usually plays a counterpoint in the background and using the glissando. This orchestra made 44 recordings between 1928 and 1929, and consisted of the following musicians:

In June 24th of 1935, Carlos Gardel dies; would the tango leave with him? During these bad times, Juan D'Arienzo will give it a second wind every night at Chantecler cabaret. The arrangements are pulsed with 4 strong accents per time, instead of 2, which provides a sensation of strong rhythm. The RCA Victor label sign with D'Arienzo the recordings of some instrumental recordings. We are on 2nd July 1935 and the orchestra was built as follow until the end of the year:

it would appear that Anibal Troilo, Jorge Argentino Fernandez and Hugo Baralis (at that time, members of the sextet Elvino Vardaro) completed the orchestra on few opportunities and on some of the first recordings of 1935.

Quite soon, D'Arienzo meets the pianist Rodolfo Biagi who just left the orchestra of Juan Canaro (Francisco Canaro's brother) and who also plays every night at Chantecler. During this period, D’arienzo was also called "El Rey del Compas" (The king of rhythm), by the artist presenter. Juan and Rodolfo become friends and when the contract with Fasoli ends, D'Arienzo incorporates Biagi in his orchestra. Biagi brings a strong influence by accelerating even more the tempo and using bright transitions at the piano. By the way he is also called "Manos Brujas" (bewitched hands). The evolution of the style can be noticed from the recording of 9 de Julio in December 1935.

The next year, Juan D'Arienzo plays at Radio El Mundo and increase the band by adding 2 bandoneons and a violin. D'Arienzo enjoyed a great deal of success and influenced the tango trends of this period.

Dancers use to know the famous tango Paciencia recorded by this orchestra in 1937, composed by Juan D'Arienzo and Francisco Gorrindo and sung by Enrique Carbel.

In July 1938, Rodolfo Biagi leaves D'Arienzo to create his own orchestra and records several hits for the label Odeon. He is replaced by Juan Polito, who is probably the pianist the most important in the history of D'Arienzo orchestra (he was already there in 1928 and we will hear again about him until the last recordings). Having a great success, El Rey del Compas continues with his style and will increase even more the speed until 1941. The rhythm and the lively accents prevail on melody, which is sometimes suggestive only. Bandoneons are at the forefront and more numerous than violins; the piano keeps an important role by completing the rhythmical structure.
This style has a huge impact and success on Argentineans who are more and more interested by tango. It also influences all the orchestras of this period, which will follow the new tendency with arrangements focused on rhythm and speed increase. By the way, it was also a condition to be signed by the labels and to be able to perform studio recordings. We enter into the golden age...

D'Arienzo said (words from 1949):
"For me, the tango is first of all rhythm, energy, strength and personality. Tango in the old days, the one from Guardia Vieja, had all of this, and we must ensure that it never loses it.."

All the musicians leave the orchestra and Juan D’Arienzo must build a new one from scratch. Hector Varela takes care of arrangements and Fulvio Salamanca replace Polito at the piano.

This new orchestra recorded in November 1943, the best seller disk of the tango history. This 78rpm includes La Cumparsita and La Puñalada on the other side. The picture on the side is from 1957 with the RCA Victor when the disk went gold: 10.000.000 copies.

From 1942, the rhythm and speed tendency starts changing in favour of musical phrases. Several orchestras participate to this change, for example Carlos Di Sarli who uses more violins and give priority to the melody. This time, it is Juan D'Arienzo who will follow the new trend by slightly slowing down his tempo and levelling the melody to the rhythm which remains very present. Hector Mauré plays a key role in this change thanks to the continuity of his phrasing. He flies over the beat with a rare talent and contributes to a kind of balance between rhythm and melody.

In the middle of the 40’s, Jorge Ceriotti is replaced by Salvador Alonso (cousin of Hector Varela) and Luis Pinotti, which increase the bandoneons line to 6. As a result the orchestra was built as follow:

During the same period, the style will remain with a slight increase of speed (which had slowed down from 1942). This acceleration occurs over a long period and depending on tangos, without following a strong tendency as it was the case before. Should we consider a 1938 return? It’s true that D'Arienzo comes back to his favourite recipe, but without forgetting the last years nor the melancholic phrasings.

Between May and September 1950, the orchestra of the King of Rhythm will change a bit. The bass player Olindo Sinibaldi dies passes away and Hector Varela leaves the group to make his own orchestra. He is followed by Alberto San Miguel, Salvador Alonso and Luis Pinotti. The arranger role carried by Varela until then, is fulfilled by the pianist Fulvio Salamanca. These changes have some effects on the orchestra style. While the orchestra from the 40’s was slower and with a lower register, the new one is faster and brilliant.

Here we are: 1957 ! And some changes will again occur. Fulvio Salamanca leaves D'Arienzo to create his own orchestra. He is replaced by Juan Polito (the return), while Carlos Lazzari takes over the arrangements until the end (1975). The singers Alberto Echagüe and Armando Laborde also leave. D'Arienzo falls back on two great voices: Mario Bustos and Jorge Valdéz. Echagüe will return in 1968 and Laborde in 1964.

"The human voice must be an instrument of the orchestra, like others, and nothing else. To sacrifice everything to the “opera singer” is a mistake." - D'Arienzo in 1949.
From 1957, he will however put the singers on the forefront, or at least more than usual, with longer parts and more present voices.

The following changes occurred after 1957:

Other musicians participated until 1975. They are not all mentioned here.

There is large number of singers who joined Juan D'Arienzo. Some of them, like < href="music?C="Alberto Echague">Alberto Echagüe are the most emblematic of the orchestra, for others it was more brief or they did not had the opportunity to record. Here below you will find a list of singers by chronological order:

How to identify D'Arienzo at the milonga

To identify Juan D'Arienzo at the milonga, you just need to recognize...

Otherwise, when everybody stand up to dance...

Gregory Diaz
2012-02-01
Do not copy this content without authorization.

18th March 2013. On my right: Carlos Puente, historian and specialist of Juan D'Arienzo. On my left: Horacio Palma, singer of Juan d'Arienzo in the 60's. I had the opportunity to share few words with this talented maestro and get a magic instant caught live with an old Smartphone.
Watch the vidéo 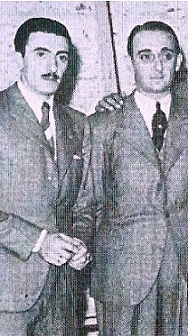 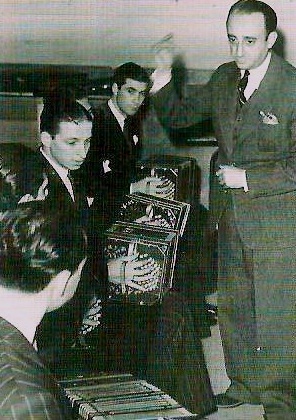 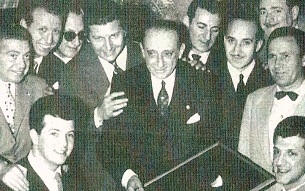